The newly built Raiffeisen Diana Haus (RDH) has served as the headquarters of Raiffeisen Informatik since 2000. The cornerstone for the building was laid by Christian Konrad in 1998, but the road to this permanent home was a long one.

The Raiffeisen Diana Haus (RDH) was completed after a construction period of three years. It reflects the modern architectural design of a functional, turn-of-the-century office building and includes Vienna’s municipal Diana Bad swimming pool complex. Roughly 600 workstations were placed in operation during 2000.

Raiffeisen Rechen Zentrum (RRZ) develops a future-oriented strategy for the new decade and related challenges and changes its name to Raiffeisen Informatik Zentrum (RIZ). The company relocates to the completed Diana Haus in Vienna‘s Lilienbrunngasse 7-9 – and can now bring nearly all employees together at a single location.

Raiffeisen Informatik operates over 2,000 centralized and decentralized servers and services more than 15,000 clients (PCs, notebooks, self-service devices) in 2003. Moreover, three mainframe systems with a combined total of 25 CPUs and a performance capacity per system of up to 2,348 million instructions/second are operating at various computer centre locations, in part also in the Diana Haus.

RIZ is renamed „Raiffeisen Informatik“ and a corporate structure is created in 2004. The workforce is growing steadily. Space in the Diana Haus is in short supply for the now over 900 employees, and additional rooms are rented in neighbouring buildings. Initial ideas concerning the construction of an annex are discussed.

Parts of RDH undergoes extensive renovation in 2007. On one floor, a modern control station for system monitoring is installed. Additional locations on the Donaustraße are rented and equipped for office workstations.

An annex opens for operations at Raiffeisenplatz, directly adjoining the headquarters, in 2013. It is connected to the headquarters on two levels and provides space for roughly 350 employees as well as large, flexible meeting rooms in a modern, open-space design. In 2014, operations start at the roughly 5,000 sqm, state-of-the-art, backup computer centre built by R-IT in Vienna’s Donaustadt District.

RRZ had only two employees when it was founded in 1969 – Hans Windbichler, the full-time managing director, and a secretary “on loan” from the shareholder Raiffeisen-Zentralkasse NÖ-Wien (RZK).

Both rooms were provided in part by Raiffeisenbank Wien (RBW). However, RRZ fought successfully for personnel as well as office space from the very beginning. 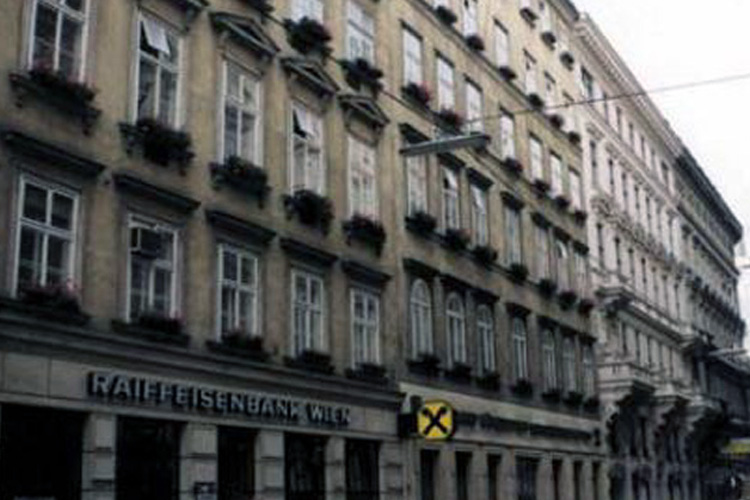 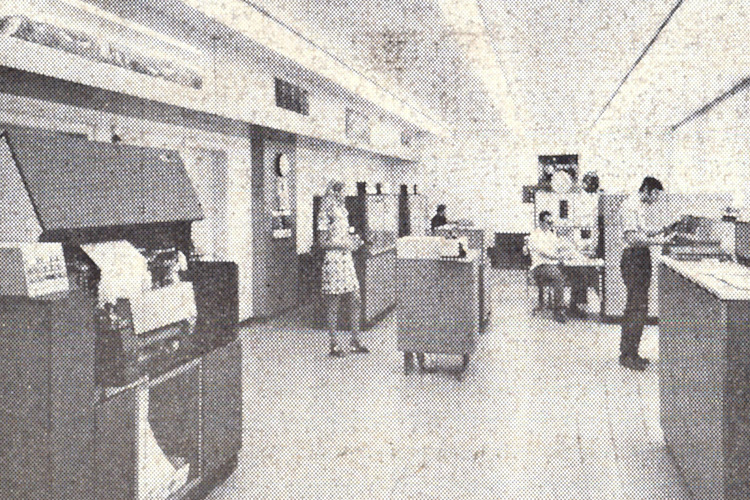 Two floors in the Göttweigerhof (the headquarters of RZK and the association of rural cooperatives “Verband ländlicher Genossenschaften” – VLG) were soon occupied in part by RRZ staff. Management, administration and customer service resided on the RZK floor, while operations and distribution were located on the VLG floor.

The expansion of the RRZ workforce was accompanied by a growing hunger for office space. Contrary to many remarks, RRZ’s office needs were not the reason for the construction of the Raiffeisenhaus Wien (RHW) on the Danube Canal. RRZ’s needs were, of course, considered in planning the new building – especially the technical infrastructure requirements for the major computing equipment. In 1977 RRZ relocated to the new office building on Raiffeisenplatz.

In 1976 software developers plus employees and equipment from the EDP branch at Passauerplatz were transferred from Genossenschaftlichen Zentralbank (GZB). RRZ was then spread over three locations and experienced its first space problems in RHW. In 1977 RRZ management noted with satisfaction that RBW was relocating to a new administrative building in the neighbouring Hammer-Purgstall-Gasse – that freed up space on the third floor of RHW Platz for RRZ. 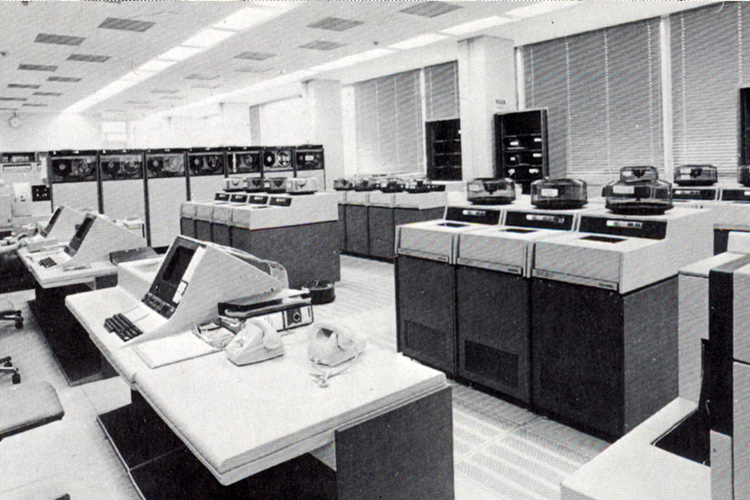 RRZ terminated its activities in the Seilergasse during 1977. The remaining operations and distribution personnel finally relocated to RHW. The staff from the branch office on Passauer Platz were transferred from RAIBAU when the new Raiffeisen-Bausparkasse (RAIBAU) computer centre opened in 1982, but data was archived at Passauer Platz for some time afterwards.

The next great leap towards a new home took place in 1986 when the software development department relocated to the Kleine Sperlgasse. However, it only took a short time before this facility also became cramped. The RRZ departments in RHW were suffering from a lack of space – there was a definite need for action, but no available room in RHW. 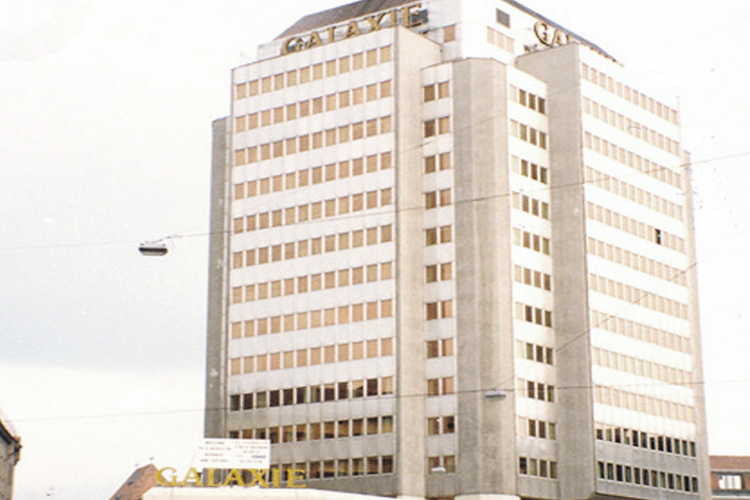 Three floors in the “GALAXIE“, a high-rise office building on the Praterstrasse, were available. In a project planned with military precision, the necessary technical equipment was installed in these rooms and, at the end of March 1988, all departments – apart from EDP production – relocated from RHW and the Sperlgasse. This created a certain amount of breathing space, but only for a while. As a result, the next facility expansion was not due to a lack of space.

A second computer centre was installed at the Zentrum am Stadtpark – in short, ZAS. It handled certain EDV applications for Raiffeisen Zentralbank (RZB) and was used as a computer for the software developers but – as one of the main reasons – also served as a backup computer centre for RRZ and, in turn, for the entire GEBOS area. With ZAS, the RRZ quickly became too small.

Management, administration, personnel office and third-party payroll processing moved back into the RHW in autumn 1991. The staff in the software development department were outsourced to the subsidiary “FOCUS-SOFTWARE-CONSULTING“ (FSC) and/or the affiliate “RACON-EDV-Software GesmbH“ (RACON) in 1991. RACON took a big step during the same year, namely towards Semmering, a town in the province of Lower Austria. In Niklasdorf, a suburb of Leoben, a branch office was opened in a building belonging to the Austrian Institute for Economic Development (“Wirtschafsförderungsinstitut”). Graduates of the local EDV school found employment in this new RACON branch office. At that time, the current headquarters were in the planning stage or under construction. RRZ, RACON and FSC relocated to the new building on Hollandstraße in November 1992, which was subsequently named “R I Z“ – Raiffeisen-Informatik-Zentrum. Operations, distribution and network support remained in RHW or ZAS. 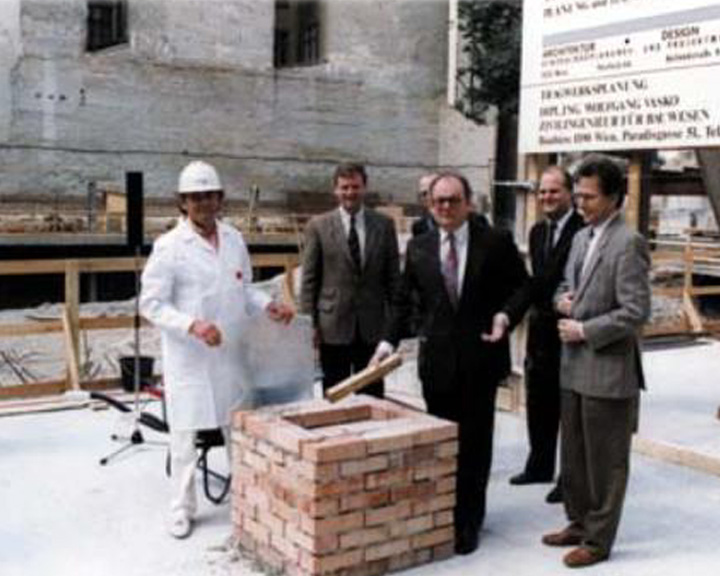 The RIZ on Hollandstraße provided enough space for the time being, and the square footage per workstation was a substantial improvement over previous locations. There was even enough space in the RIZ for other companies in the Raiffeisen sector.

The RRZ, RACON and FSC workforces continued to grow in 1994, and guest tenants also needed additional space for new employees. The cycle had started again. RRZ searched for office space to meet the projected needs and rented space in the administrative building in the Hammer-Purgstallgasse which had been vacated by RBW.

Additional office areas were occupied in the Obere Donaulände two years later, but the need for space continued to grow. Discussions soon focused on the construction of a new office building for the company’s own use. It would become a very special house which, in cooperation with the city of Vienna, would also include a public swimming pool.